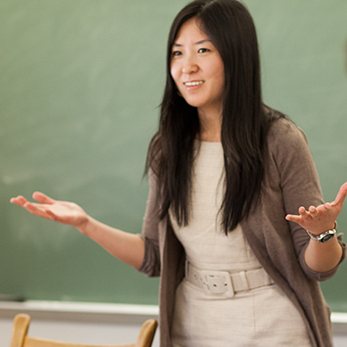 MA in Linguistics and Cognitive Sciences, University of Delaware
BA in Chinese Teaching as a Foreign Language, Beijing Language and Culture University

Yinxue Zhao, a scholar and writer, is certified by American Council on the Teaching of Foreign Language as an Oral Proficiency Interview tester and is a scholar of China 5th and 10th Advanced Linguistics Summer Institute. In addition, she was an interpreter for CCTV4 (China Central TV) in the documentary "Across China" in 2011, where she interviewed Lester R. Brown, the president of Earth Policy Institute in Washington, D.C, on China's strategies towards sustainable development. and Sidney Rittenberg, one of the first American journalists and scholars who travelled to China during World War II, on the interface of traditional values and political reform in China. She led the Simon's Rock summer Chinese Qingdao program with Bard College in 2013 and the northern China research trip on text-based study of sacred trees in 2015. Before joining Simon's Rock, she taught at Vassar College. She has been teaching at Simon's Rock since 2011.