Like many Rockers, Maudie Hampden Shah ’99 and Sumul Shah ’99—two of the co-founders of a free online platform called Amino that allows users to find doctors with the experience to meet their specific medical needs—had no idea that early college was an option until a recruitment brochure arrived in their mailboxes when they were high school sophomores.

Maudie remembers the picture of “a grinning science geek,” and the headline, “What if you didn’t have to wait to start college?” It directly spoke to her. Although she was in an engineering magnet program at a public high school in Florida, she did not feel sufficiently challenged. After perusing the Simon’s Rock website and learning about the Acceleration to Excellence (AEP) scholarship, her parents encouraged her to apply and said they’d allow her to go if she got a full scholarship. “When I received the letter saying I had won, I felt like some magical door had just opened, inviting me onto an entirely different path from the one I had been on so far,” she says.

Sumul, who attended high school in Pennsylvania, received the same brochure with “Dmitry Kondrashov wearing an oversized T-shirt and grinning quizzically in the lab,” as he recalls, and applied for, and received, a full AEP scholarship, too. “I’ll never forget opening the acceptance letter and realizing my life was about to change,” he says. 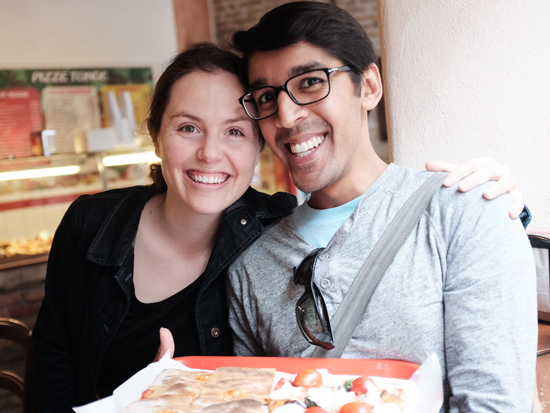 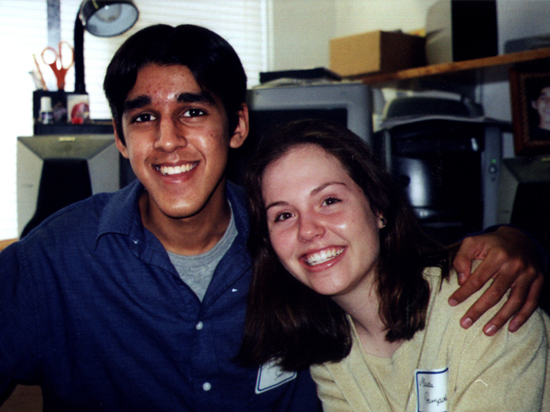 Maudie and Sumul met the first week in Writing and Thinking Workshop. It was a heady experience, Maudie recalls: “Simon’s Rock was the first place I felt surrounded by peers who shared my academic curiosity, who liked difference more than conformity, who sought out challenges.”

Maudie and Sumul bonded over their shared ambition—and confusion— in calculus and physics. “We quickly came to understand each other as academic rivals-slash-collaborators,” says Sumul. They became lab partners in chemistry class, began dating after graduation, went on to study electrical and computer engineering at Cornell, and married in 2005.

“I’ll never forget opening the acceptance letter and realizing my life was about to change.”

They describe their two years at Simon’s Rock as transformative. “When people ask me about the quality of academics at ‘that early college’ compared to Cornell, I chuckle and tell them it’s no contest,” says Sumul. “The teachers I had the privilege to work with at Simon’s Rock were truly inspiring.” Maudie cites cognitive neuroscience professor David LaBerge as especially influential and impassioned. “He really loved teaching and was adept at bringing abstract concepts to life through metaphor and demonstration, which was a gift,” she says. “David’s classes were where I started learning how to think about the mind with models and how to design experiments to tease out what’s going on inside these gray lumps of wetware we’re all carrying around in our heads.”

The Shahs began a consulting business, Studio Shah, where they offered data-driven product designs for companies like eBay, CloudFlare, and Collaborative Drug Discovery. In 2009, they were hired by David Vivero to design the user experience, user interface, and branding for RentJuice, an online real estate marketplace, which he sold to Zillow a few years later. In 2013, he approached the Shahs about applying “health care claims data assets that could be used to create a direct-to-consumer product to help people make better health care decisions,” says Maudie. The project was so compelling that the Shahs proposed becoming co-founders so they could devote all their energies to the new company, called Amino.

Launched in October 2015, Amino gives consumers the ability to find the most experienced doctors to perform certain surgeries or treat specific conditions. “Since the summer of 2016, Amino has been offering cost estimates and out-of-pocket calculators for dozens common medical services,” says Maudie. “We’re going to be rolling out more and more cost data over the coming months to cover more of the procedures and services people are interested in shopping for based on price.”

“…Sumul and I may have infused a bit of the wonderful Rocker weirdness into the Amino culture, so I get to experience some of it again in the day-to-day at our office.”

The vibe they’ve fostered at Amino’s San Francisco headquarters is collegial and familiar. “For a long time, what I missed most about Simon’s Rock was the feeling of community and belonging that I experienced with my friends and teachers there,” says Maudie. “I’m starting to feel like Sumul and I may have infused a bit of the wonderful Rocker weirdness into the Amino culture, so I get to experience some of it again in the day-to-day at our office.”

Amino may never have launched if Maudie and Sumul had ignored those brochures they received nearly 20 years ago. “Leaving high school early to start college when I felt ready, rather than when I ‘should’ go, gave me confidence to go off the beaten track many times afterwards,” says Maudie.