Imagine a social media platform that complements and amplifies your in-person connections rather than tethering you to the digital world. Or a website that makes the visa process intuitive and simple for international students. Or a tool that responds to audio by creating real-time, custom music videos.

These technology prototypes have already been developed by students, and are among the winners of the Bard College at Simon’s Rock Hack-a-thon that was held in May, HackSR 2021.

While “hack-a-thon” may sound like the activity of criminal cyber groups or the stuff of modern-day thrillers, it’s actually a tech industry term for an event challenging participants to code anything of their choice within a given time-frame, from mobile apps to websites or robots.

A snapshot of the Android App Development workshop.

The goal of the Simon’s Rock event was to spark innovation, sharpen students’ technical and coding skills, and offer the opportunity to network with other students and alumni working in the tech industry. Students from Simon’s Rock, Bard College, and the Bard High School Early Colleges were invited to the 24-hour virtual event to compete in coding challenges alone or in teams of four.

Current students and tech enthusiasts Iman Anwarzai ’17 and Samarth Agnihotri ’18 organized this year’s initiative as part of their work in the Simon’s Rock Studio. They had support from Studio creator and faculty member Asma Abbas and STEM faculty Amanda Landi and Marina Barsky, along with alumni Oscar Hernandez ’13, Roop Pal ’15, and Naol Asfaw Negassa ’14, who helped raise a total of $500 to be awarded to the top three “hacks”—new tech tools and solutions—developed by students over the course of the marathon event.

The event kicked off with a keynote address by alumnus Brian Smith ’08, lead intellectual property counsel at Facebook. He shared insight on his journey from Simon’s Rock to NYU Law School, and how his path ultimately landed him in the tech industry. 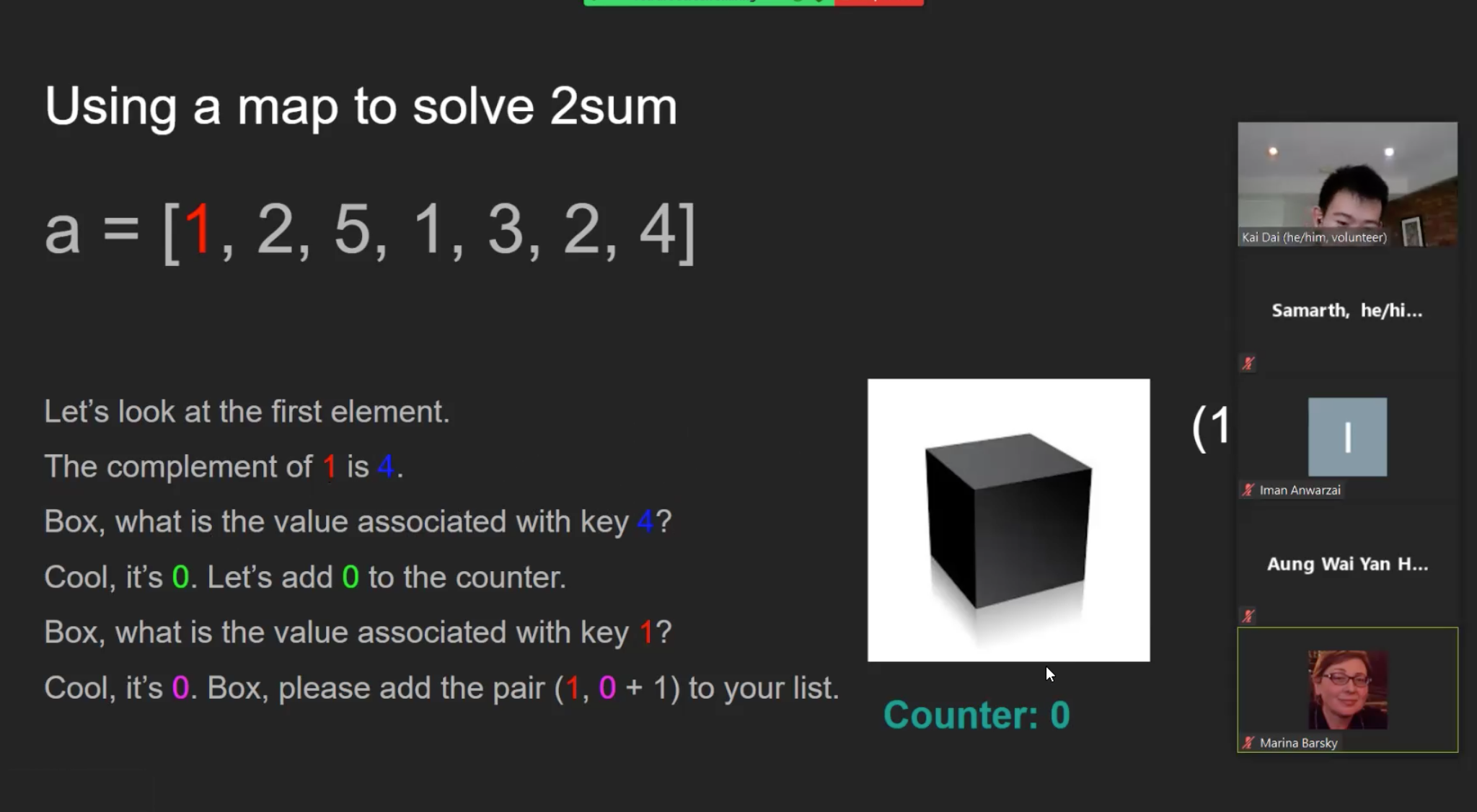 A presentation during the competitive programming workshop.

Next up were the three main coding workshops: creating a video Reaction app (think TikTok), creating an Android App, and a session on competitive programming. Then a speed networking session was followed by a panel about how to land a dream tech internship. The panel featured a stellar lineup of recent Simon’s Rock alumni as well as Iman—all in the Dual Degree Columbia Engineering Program—including Kai Dai ’23, intern at Amazon, Cassidy Locascio ’22, intern at PayPal, and Isabella Cho ’22, a Facebook intern. 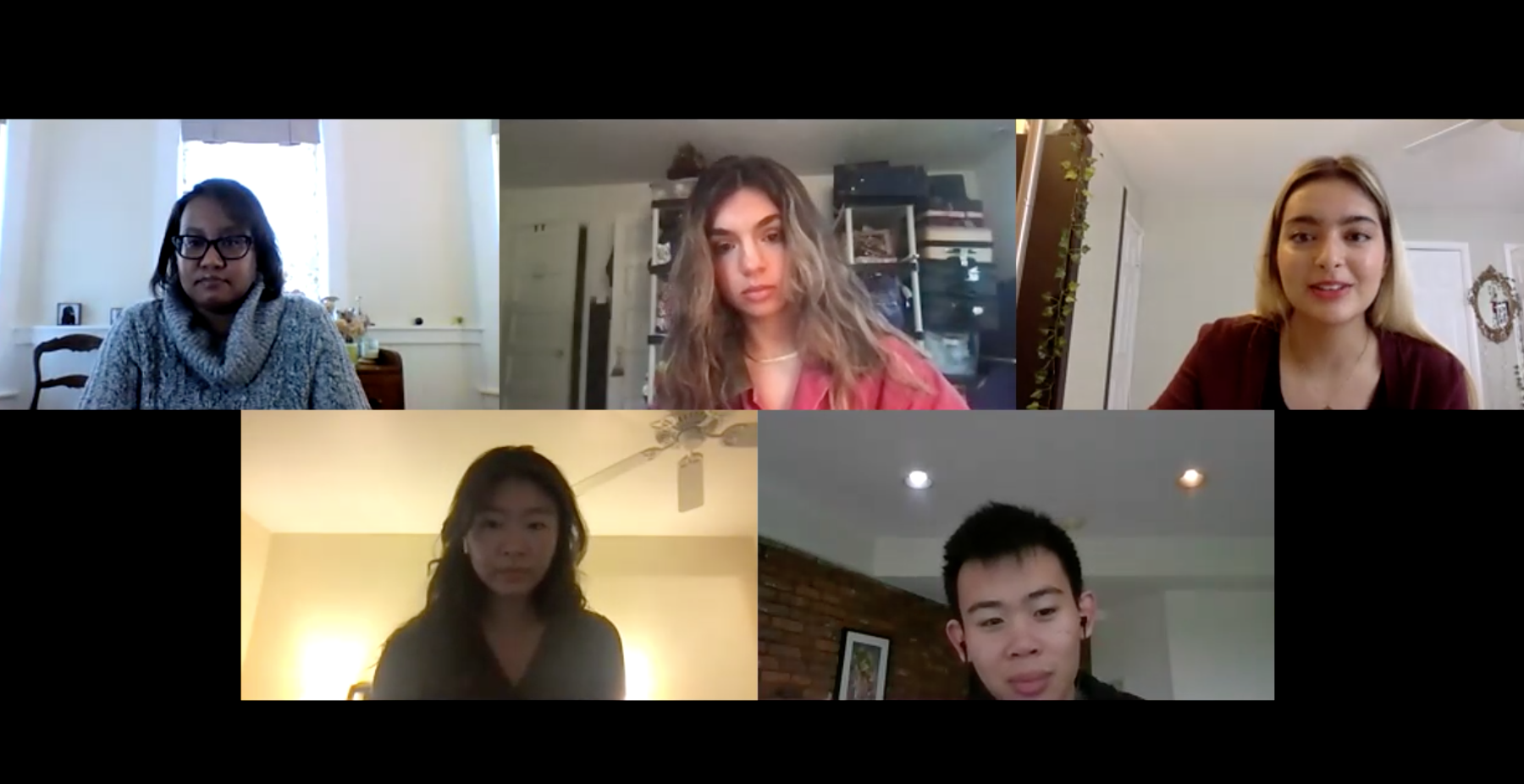 A still from the alumni panel, "Landing Your Dream Internship."

The festivities culminated with a panel of alumni judges reviewing students’ innovations and hacks. The top three of the seven winning projects—six of which were from Simon’s Rock students—each walked away with a cut of the $500 winnings. The winners’ hacks were chosen based on four key criteria set by the judges: problem, solution, insight, and star quality.

In the eyes of Iman and her fellow Rocker hosts, HackSR2021 was a resounding success. Not only did it bring new community members into the tech sphere while creating stronger connections with alumni, but the original concepts developed during the event were largely seen as having potential to extend far beyond the Bard Network.

The full of winners includes: