During her math classes at Bard College at Simon’s Rock and now as a team leader at a nonprofit, Phyu Hninn Nyein’s road to success has been filled with the opportunity to help others. 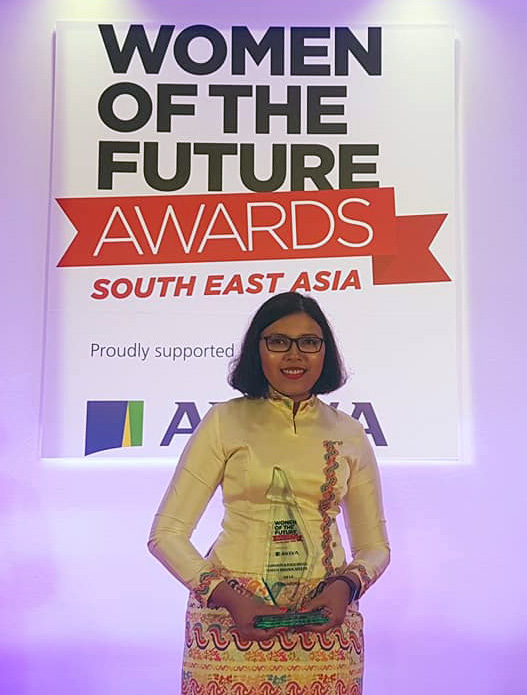 In recognition of her efforts, Women of the Future Awards, South East Asia presented Hninn with its inaugural Community & Public Service Award for her contributions as a community-spirited woman in business under the age of 35. The award recognized “her vision of the future, her awareness of the wider social impact of everything she does, and her humility.”

Hninn returned to Myanmar in 2012 after her academic career in the United States and joined Proximity Designs. A pilot program until 2015, it is now a fully operational nonprofit offering three platforms of service for small farms: advisory, technology, and finance. As general manager of the Farm Advisory Services team, Hninn is dedicated to improving the lives of rural farmers in Myanmar, where 70 percent of the population is involved in agriculture activities.

On the Front Line of Innovation

Now the largest agricultural services platform in Myanmar, Proximity Designs is at the forefront of farming technology. Among its services is farming agronomy, a practice that applies scientific methods and thinking to modern agriculture. It is new to Myanmar, said Hninn, who leads the team of agronomists, soil scientists, farmers, and technologists who work with farmers in over 2,800 villages.

The evolution of technology use in Myanmar has been slow. Hninn said there were no smartphones in the country until 2014, and now just about every household has access to technology. With her team, she has advised over 300,000 smallholders on climate-smart agriculture. By helping small farms become profitable, while juggling complex situations, like market prices, government policies, and climate change, families can continue to farm for generations.

The Women of the Future Awards showcases female trailblazers who are facilitating positive global change. Hninn is one of them. Accepting her award, she said, “I would like to point out that there are a lot of good people who are doing their best to move [Myanmar] forward, and I am really humble and very proud to be representing all of those people here tonight.”

Gender Equity in her Workplace

Hninn was the first female member of Proximity Design’s farm advisory team, and as she has risen through the ranks, has worked with the organization to address gender equity and awareness in the workplace. More women have been hired through recruitment efforts and developing hiring strategies with her male counterparts. Women now make up 40 percent of the team and 20 percent hold management positions. As a team leader, Hninn continues to support her female colleagues.

Citing that “talent shortages are more widespread in Asia than any other region—more than 48 percent of Asia Pacific employees say that talent shortages are posing difficulties in the hiring process,” Women of the Future believes that women represent a large untapped resource. Its goal is to encourage, motivate, and provide role models to inspire and strengthen the female talent pipeline. By honoring their talents and successes, the program hopes to create a global community of supportive and collaborative women.

From Myanmar to Simon’s Rock

Hninn’s brother and sister both studied in Singapore and her parents expected her to as well—until she heard about Simon’s Rock. Hninn met Ba Win, vice president of Early College Policies and Programs, as he was presenting during an application day at the American Center in Yangon, Myanmar. He took the time to meet with her parents to address their questions and determine if Simon’s Rock was the right fit for Hninn.

Great Barrington may have been far away from Myanmar, but Simon’s Rock made Hninn feel at home. What she remembers the most was that the community was like a second family—and when she visits, everyone remembers her. “Everyone really invests their time and energy in you, and shows genuine concern.”

Hninn’s parents are both engineers, so she learned early on how math can be used in everyday situations. She was excited to discover that she could further explore mathematics at Simon’s Rock. “The math concentration is very personalized at Simon’s Rock; I got so much attention and care from the professors,” like Bill Dunbar, Allen Altman, and Robert Snyder. “Each class was like a tutorial.” Hninn excelled in her classes and thrived.

Pairing math with biology was an unusual direction for a double concentration, but Hninn has always considered math to be a foundation of science. Beyond the classroom,she was involved in environmental conservation work along the Housatonic River in Great Barrington, and conducted research in molecular biology with Biology Professor Susan Mechanic-Meyers. Hninn was awarded the Rodney Christopher Scholarship to study away for a semester at Rockefeller University in New York City, where she did research in molecular genetics.

Hninn’s senior thesis, “Tick-tock Goes the Clock: A Study on Circadian Rhythms,” was an extension of her research work while studying away. She studied circadian rhythms in zebrafish with her thesis advisor, Biology Professor Joy Lapseritis ’90, and surveyed Simon’s Rock students and their sleep patterns.
At Commencement, Hninn received the Division of Science, Mathematics, and Computing Prize, given to a graduating senior for their outstanding performance in this academic division. As a rising junior, Hninn was awarded the Hutchins BA Merit Scholarship for demonstrating significant contributions to the Simon’s Rock community, and was also the recipient of the Elizabeth Blodgett Hall and the W.E.B. Du Bois scholarships.