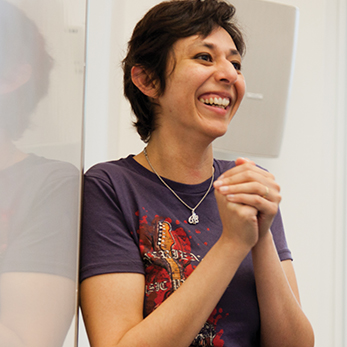 Professor of Politics and Philosophy

Research Interests: anticolonial and communist politics, poetics, and aesthetics; materialism and religion; critical theory; affect and sentiment; histories of the subject and of relation; post- and trans-disciplinary form and method; democratic internationalism; worldmaking.

Dr. Asma Abbas is a transdisciplinary political theorist interested in the history of forms of political existence and knowledge. She was born and raised in Karachi, which still furnishes most of the affective abundances that drive her vocation. Situated at the intersection of politics, ethics, and aesthetics, her work addresses how these domains and their demands shape the tasks of knowledge and subject production in a global postcolonial context and inform struggles for peace and justice. Her scholarship and teaching evince a cultivated practice in anticolonial and materialist politics and aesthetics, and a commitment to de-provincialising marginalized ways of thinking, being, and knowing in the service of liberatory anti-colonial, anti-capitalist, antifascist, and anti-nationalist hospitalities, imaginations, and cultivations in practices of knowing, being, and worldmaking.

Having joined Simon’s Rock in 2005, Abbas is Professor of Politics and Philosophy, and Director of the Simon’s Rock Annex for Transdisciplinary and Experimental Studies. In recent years, she has also served as the Dean of Academics and Professor of Liberal Studies at the Indus Valley School of Art and Architecture in Karachi, Pakistan, and the Fulbright-Masaryk Distinguished Chair in Social Studies at Masaryk University in Brno, Czech Republic. She is senior research fellow at the Global Centre of Advanced Studies in Dublin where she is designing a new internationalist education initiative titled GCAS-Jehān, associate faculty at the Brooklyn Institute for Social Research, and teaches in the M.Phil. in Art and Design at the Indus Valley School of Art and Architecture as well as at the Bard Early Colleges in Hudson and New Orleans.

Abbas has previously served as Director of Advanced Studies, Emily H. Fisher Faculty Fellow, Division Head for Social Studies, Faculty Convener of the Simon’s Rock Study Group on Institutional Transition and Mission, founding faculty and coordinator of the Proseminar in Humanistic and Social Scientific Inquiry. As Director of Advanced Studies (now Transdisciplinary and Experimental Studies), Abbas was tasked with the redesign and pilot of a studio-based pedagogically innovative transdisciplinary studies programme emphasising student initiative and collaboration, and student-alumni-faculty partnerships, which has taken form in the Simon’s Rock Annex. She serves on the Provost’s Innovation Council, and is engaged in the design and establishment of the Early College Commons and Press, enabled by a grant from the Open Societies Universities Network, that will be housed at the Simon’s Rock Annex and the Early College Research Initiative. Outside of Simon’s Rock, Abbas is founding organiser of Hic Rosa Collective (and its international travelling Studio in Materialist and Anticolonial Politics and Aesthetics), the Falsework School for political education, Some Beloved Productions, ACCREW Caucus of the DSA, and the Common Tern Internationalist Co-op of Cultural Workers. In addition to two monographs, her work has been part of several volumes and anthologies, and her essays have appeared in Hypatia, Theory and Event, Democratic Theory, Journal of Politics, Politics and Culture, among others.  A complete list is accessible on her website.