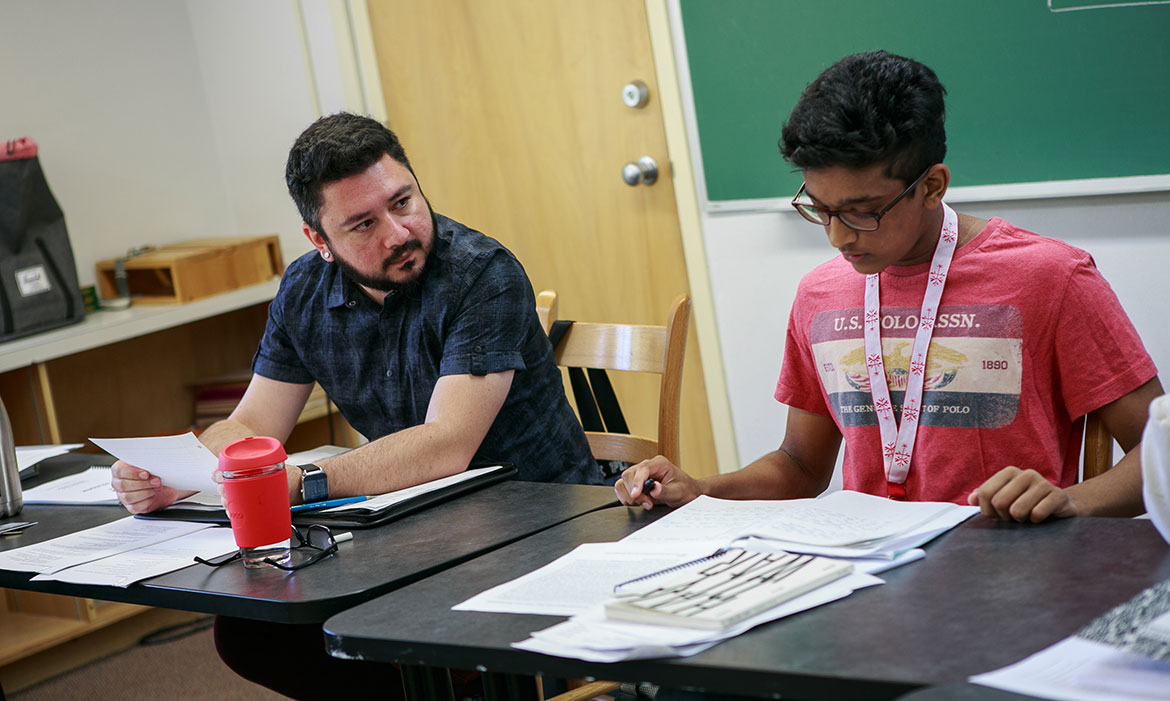 Spanish Language and Context I and II

Spanish 100 and 101 form an intensive introduction to basic Spanish that incorporates a task-oriented approach to language learning. The course has been designed to help students develop fluency in understanding, speaking, reading, and writing Spanish. It also aims to prepare the student to acquire a deeper understanding of the civilization of the Spanish-speaking world. The class is conducted in Spanish and meets five hours per week.

No prerequisites. This sequence is offered every semester.

Intermediate Spanish I and II

This course, conducted in Spanish, highlights a particular aspect of Spanish-speaking culture (e.g., music, politics, literature, film). Topics vary by semester and instructor. Building on what students have learned in Spanish 100–101 this course also enhances students’ communication skills through oral and written practice and grammatical refinement. This course fulfills the language requirement in one year for students with sufficient background.

Prerequisite: Spanish 101 or appropriate score on the placement exam. This sequence is offered every semester.

This course is designed to improve oral and written proficiency through the reading and analysis of works by modern Spanish and Latin American authors. The principal points of grammar and syntax are reviewed.

Prerequisite: Spanish 205 or permission of the instructor. This course is generally offered once every two years.

Designed for students with a significant foundation in Spanish, this course features short novels and novellas by such authors as García Márquez, Sabato, Donoso, Carpentier, Sepulveda, Peri Rossi, Castellanos, and Puig. The authors selected are representative of innovative experimental writing, including magical realism. The works explore dreams, myth, legends, questions of power and identity, love, and death. Intended to acquaint the student with the artistic representation of Latin American culture, the course should prepare students to read full-length masterpieces.

Prerequisites: Spanish 205 or equivalent or permission of the instructor. This course is generally offered once every two years.

Latin American writers have created a number of significant literary sleuths who challenge and change the detective fiction that began in Europe and the United States. Why? What does it mean to parody Poe? To make a detective political? Course readings traverse the rich tradition of la novela detectivesca in Latin American letters. In an array of detective stories and novellas, we see the influence of dime novels and popular culture, an “upside down” form in which the state is criminal, the aesthetics of a labyrinthine plot, and nods to Poe and writers from Europe. All readings and discussions in Spanish.

Prerequisites: Spanish 205 or equivalent or permission of the instructor. This course is generally offered once every two years.

Considered by many to be the father of surrealist cinema, Spanish-Mexican filmmaker Luis Buñuel created a body of work that continues both to inspire and confound viewers. Through analysis of some of his twenty films, we will endeavor to situate his oeuvre within the changing artistic and politicized contexts in which he lived and worked. From his early days in the company of Dalí, García Lorca, and Breton, to his exile in Mexico during the Spanish Civil War, to his shifting interests in the avant-garde, Communism, and the commercialized film industry, we will confront the questions—related to artistic form and social critique, unconscious vs. rational meaning, realism and objectivity—that his work and life provoked.

Prerequisite: Spanish 205 or permission of the instructor.

Spanish Conversation: The Good, the Bad, and the Melodrama—Art and Popular Culture in Latin America

This course emphasizes and develops speaking skills through the discussion of cultural and political topics. Attention is given to national and regional variations in Spanish as well as to effective strategies for communication. Students are expected to assist in generating topics and in researching them outside of class. All readings and discussion in Spanish.

Prerequisite: Spanish 204; permission of the instructor (if taken without 204 completed, an additional Spanish language class is needed to fulfill the requirement). This course is generally offered once two years.

Between Sin and Sickness: A Journey Through Latin American “Queer” Literature

The Latin American literary tradition has a "queer" facet that has been hidden and distorted by critics and institutions of power for more than 300 years. The purpose of this course is to examine some of the most important texts of this tradition. We confront these texts in chronological order, and analyze the particular contexts in which they were conceived. Theoretical concepts and constructs from Queer and Gender Studies are also used to help decode and illuminate the primary, literary texts. This exploration seeks to expose how the authors, the texts, and their reception have been conditioned by religious, medical, legal, and academic discourses for the last three centuries.

Under these course numbers, juniors and seniors design tutorials to meet their particular interests and programmatic needs. A student should see the prospective tutor to define an area of mutual interest to pursue either individually or in a small group. A student may register for no more than one tutorial in any semester. Recent tutorials have included: Contemporary Fiction from Latin America, Women Writers from Spain, and Indigenous Literature and Culture of Latin America.