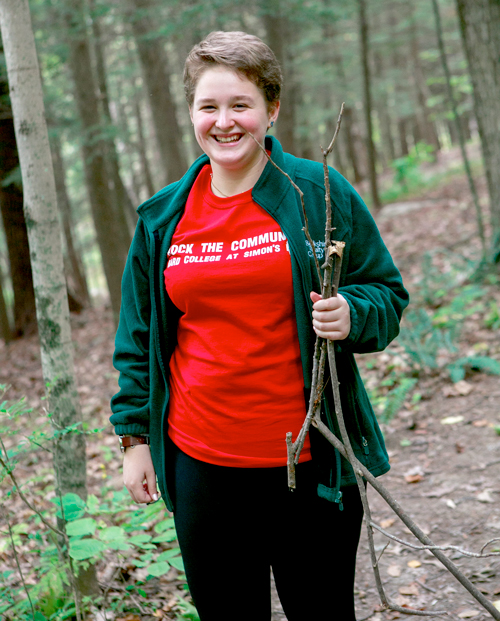 Jess Parrot participating in the 2016 Rock the Community: A Day of Service in Honor of Emily Fisher

Jessie Parrott ’16 has been awarded a Torrey Botanical Society Undergraduate and Graduate Student Training Fellowship to study at the Eagle Hill Institute in Maine with two experienced scientists.

At Bard College at Simon’s Rock, Jessie is concentrating on Environmental and Sustainability Studies and Political Ecology. In her first year, she took Introduction to Biology and General Botany with Donald McClelland, assistant professor of Environmental Science. He said it was during Biology she became interested in plants. In General Botany, she mastered botanical concepts and at the conclusion of the course, was able to discuss complex phenomena with ease.

At the end of the fall semester, Donald suggested Jessie join the Society, based in New York City. She joined in December and applied for a grant to study ferns, lychophytes, and specifically quillworts (isoetes) at Eagle Hill.

The Society supports student training with an annual award of $1,000. The objectives of the Society are “to promote interest in botany, and to collect and disseminate information on all phases of plant science.”

For a week at the end of August, Jessie will be studying with two world experts on ferns, Dr. Robbin Moran, curator of ferns at The New York Botanical Garden, and Dr. Carl Taylon, a research assistant at the Smithsonian Institution in Washington, D.C. Donald said he had a class with Robbin in graduate school and they have published scientific research together.

“The fellowship will allow Jess to work with two of the most important and influential living pteridologists (scientists who study ferns),” Donald said.

“Getting to work with staff, faculty, and students from all departments on campus allowed for me to learn so much from others, as well as dive into a team project that gave me the opportunity to give back to school.”

Jessie is committed to getting her bachelor’s degree from Simon’s Rock and has already written her moderation statement, said her adviser, Tom Coote, coordinator of sustainability programming and visiting faculty in environmental science. He said her interests within environmental studies are quite broad, so he advised her to take part in January’s study abroad program in Montserrat, where she will study ecology and sustainability. Already looking ahead, her senior thesis will focus on environmental studies.

She was a project intern on the recently published Cool Sightings: A Year of Natural History at Simon’s Rock. Jessie said the project was rewarding and a great learning experience. “Getting to work with staff, faculty, and students from all departments on campus allowed for me to learn so much from others, as well as dive into a team project that gave me the opportunity to give back to school,” she said.

This spring, Jessie worked as a discovery garden docent at Brooklyn Botanic Garden. She was a Bard Academy and algebra tutor and will be a proctor during the upcoming Academy year.

Jessie has been involved with Becket-Chimney Corners YMCA for nine summers and is currently a counselor. There is a master’s program through the Berkshire Outdoor Center at the YMCA she plans to pursue. “I am very passionate about working with kids and working outdoors, and getting kids interested and excited about science and being outside,” she said.

Another of her interests includes writing. This spring, Jessie placed third for Dramatic Writing in the Simon’s Rock Leslie Sander Writing Contest for her screenplay, Firm Happiness. She said the screenplay is driven to increase awareness of the decreasing area of the Arctic Circle, which is pushing the tree line farther north, impeding on many local ecosystems.

“My love for science makes its way into all parts of my life.”

After earning her bachelor’s degree, Jessie plans to pursue a master’s degree and possibly a doctorate in marine biology and conservation or policy.

Learning Beyond the Classroom