We spoke with Simon’s Rock alumna Joelle Chevrier who lives in Taiwan and works as a translator and farmer. She and her wife help give voice to members of the farming community. Here is Joelle in her own words.

To start, can you share what you studied at Simon’s Rock, when you graduated and a little bit about your journey since?

Sure. I studied Chinese Language and Asian Studies (technically a double concentration, but clearly connected). I graduated in 2012. I'm now almost seven years out from graduation. The first year I stayed in the States working part-time, then I was at Qingdao University in China studying Chinese for a year, and then I went to National Taiwan University.

I've now been in Taiwan for five years and I moved from life as a student in Taipei to living in a community of farmers and learning to farm rice in Yilan County. 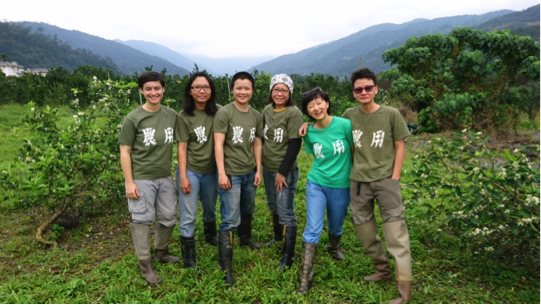 It must be fascinating to live in a different country and communicate in a language different than that of your childhood. What is the language you hear in your head, that little voice we all have for our thoughts?

At this point, things are 100% Chinese for me. Somehow, miraculously, after all of those years of study, Chinese has become internalized like a native language. I find myself more often at a loss for words in English than I do in Chinese and my parents and sisters often comment that my English has gotten worse.

What is difficult sometimes is the switching in translating. It's often about knowing the full depth of meaning expressed in the one language and being aware that you can only capture a shallow aspect of that meaning in the other language.

Translating takes tremendous skill. Can you share a couple favorite experiences as a translator?

Tomorrow morning, I'm headed to the airport to fly to Thailand with the Taiwanese delegate to a meeting of La Via Campesina, an international movement of peasant organizations fighting for their rights in the face of neoliberalism, capitalism, and widespread attacks on traditional livelihoods and food production all around the world.

This will be my third time attending an LVC meeting as the interpreter for the Taiwanese delegate. It's an incredible experience to get to meet activists from all over our region in Southeast and East Asia, and to be able to help give voice to the Taiwanese situation.

Then there was last May when I had the incredible honor to interpret for Vandana Shiva for an afternoon when she came to visit the farming community here in Yilan.

Can you share a bit about Vandana Shiva and why she is so important to farming communities worldwide?

Vandana Shiva is someone who appears in basically any documentary or book talking about the issues of farming, soil conservation, protecting biodiversity, saving seeds, fighting big agribusiness, etc. She has been working as an activist for decades and has written several important books as well as establishing a center in India called Navdanya which works to demonstrate bio-diverse traditional agricultural practices, save and share traditional seeds, and educate and empower Indian women to realize food sovereignty in their own lives.

I have been a huge fan of her work for many years. 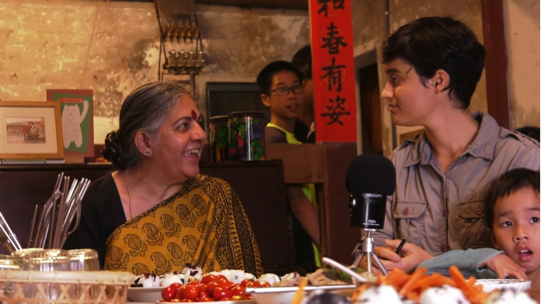 It sounds like farming is a passion for you. What has been your experience as a farmer?

I'm part of a group of women farmers called Land Dyke (土拉客) here in Yilan. Combined, the members of our group produce several types of fruit (I have delicious sliced oranges on my table right now), seasonal vegetables, bamboo shoots, "water bamboo" (茭白筍) and rice, as well as some value-added products from the ingredients we produce.

It is rewarding to produce your own food or to be able to list the names of the friends who produced the ingredients on your kitchen table. That connection to a place and people is something that I never experienced growing up and is something I can't imagine giving up now.

That said, it’s not a romantic bucolic lifestyle. It is very difficult for small-scale "organic" farmers to make a living in Taiwan and most everywhere in the world. Taiwan has the most expensive agricultural land in the world. Farmland in our area is being built into (technically illegal) "farmhouse mansions" to become weekend or retirement homes for people from Taipei. We lease our land with no contract or only a year-by-year contract and, therefore, have no stable or permanent land access. This really limits what we can do.

Our production costs are high, and so our prices are high as a result. It is very difficult to find consumers who cook regularly, can afford to pay more and think it is worth paying more to support our farming practices.

Those are big challenges. I know confronting those challenges is something that you and your wife are both passionate about. Can you share a bit about her work?

Yes. We got married in October in the US. Taiwan is still fighting for marriage equality, which may pass this year.

My wife Mei is a radio host and producer. Four years ago, she decided to give up a stable salary and cozy job in Taipei to record and produce radio content about farmers, agriculture, and rural communities. Mei moved to Yilan to be close to the active community of new farmers here. We met at a community event shortly after I joined Land Dyke.

When she launched her first farming-related show (a self-released weekly podcast at the time), I was actually featured on her first episode. It was a conversation with me and my farming mentor, a 70-year-old vegetable farmer Auntie Meiqiao. Mei and I made a connection as friends. I became a huge fan and supporter of her show. Things gradually evolved from there.

Mei now does a weekly show at the National Education Radio station, where she continues to interview farmers and talk about agricultural issues. I'm still her biggest fan, and later today, I'll be recording my monthly "International Agriculture News" feature for her show. 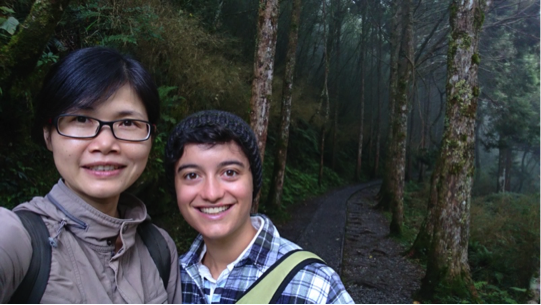 What does it mean for you and Mei to be part of this conversation on the future of farming?

Both of us try to give voice to the people who are doing important work. Through her show, Mei hopes to amplify the voices of farmers and raise awareness of the issues they face, bringing those conversations to a wider audience. Through translating, I hope to allow those voices to be heard and recognized in a different language by people who might not have the chance to hear them otherwise.

Listening to those voices, how would you change the way that we feed ourselves today?

What led me on this path in the first place was going to a farmer's market and meeting farmers. I think that the most important thing that individuals can do is make friends with a farmer and ask questions.

If Americans continue to think that they are doing their part to protect the environment just by buying certified organic products in the grocery store, then I'm not very optimistic. Answers are not on a nutrition label or stamp of certification. The answer is developing significant relationships with our food and the people who produce it. Consumer awareness and education is definitely key, but that education shouldn’t come from internet articles alone. Meet a farmer and then get your hands dirty yourself, whether that's growing potted herbs or starting a vegetable garden in your yard.

Thank you for that inspiration. Indeed, all of us at Simon’s Rock are inspired by your journey.
What advice and encouragement would you give your fellow Rockers as they start along their own paths?

Be humble. Experience things outside of classrooms and scholarly articles. Recognize that everyone around you has stories worth hearing and knowledge worth learning. Learn some basic skills, from fixing things to growing things. Experience hard labor at least once in your life.

Thanks, Joelle. It is great to interview a Rocker alumna who is making her own unique path in this world.