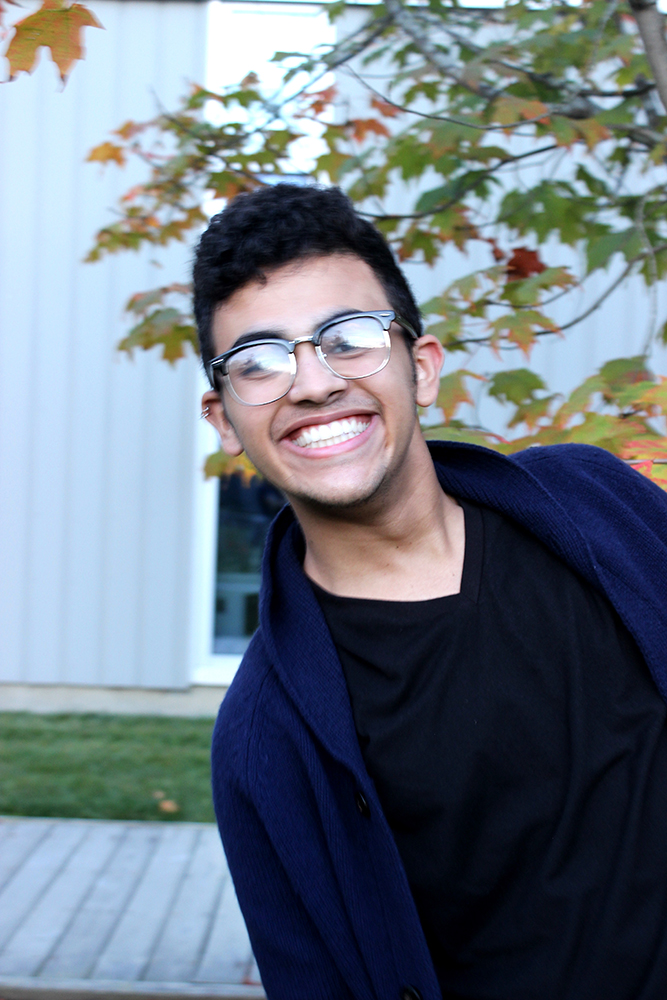 On the surface, Moamer Alsaedi ’16 can seem like any other student at Simon’s Rock. Yet as colleagues, classmates, and acquaintances come to discover, Moamer’s unflagging positivity sets the first-year student apart.

Known on campus as “Momo,” the New Yorker heard about Simon’s Rock as a junior in high school, researched the College, and applied as a January admit. “My story of coming here is the typical Simon’s Rock story,” says Momo. “I was ready for college, high school was boring and not challenging, and I wanted more.”

Momo has, in fact, been doing more. Motivated by a desire to bring the campus together and to show support for the LGBTQ+ community, the second-semester first-year student has been working tirelessly since summer to provide Simon’s Rock with the Pride Week it deserves.

“Many of our students come from communities where they might have felt like they were the only queer person in their school, in their neighborhood, and in their homes,” explains Momo. “The objective of the week is to show that our community is an accepting and loving one, one that won’t discriminate against you for how you identify.”

Momo enlisted the help of Maryellen Serratos ’16, faculty member and Pride Week advisor Amanda Landi, and Director of Activities Valerie Fanarjian. Within only a few months, they planned and coordinated a week of activities, including a concert to benefit New York City’s Ali Forney Center, the largest agency dedicated to LGBTQ+ youth in the nation. Named after Ali Forney, a gender nonconforming teen who became homeless at 15, the center works to help at-risk and homeless LGBTQ+ teens through a variety of shelters and online services.

Student involvement was central to the success of Pride Week. Weeks before Pride Week was on the radar for most students, a call went out asking student performers to audition for the concert. “It was a challenge communicating with all the parties involved and making sure everyone was updated and on the same page,” Momo adds. “Having Amanda Landi as Pride Week advisor made everything easier because she was a great help! The best part was reminding myself that even in the midst of all the chaos, this was all for a great cause.” Pride Week raised over $1,500 for the center.

“The most successful thing about Pride Week was seeing everyone get together and read poems to each other, watch movies and commentaries, and then use them as a platform to discuss LGBTQ+ topics.”

The week started with a poetry slam, followed by several talks, presentations, and a documentary screening, and ended with the benefit concert and raffle. There were alumni appearances and discussions. Each event was designed to welcome and educate.

Momo specifically wanted to help people the same age as many Rockers who might not be as privileged. The Simon’s Rock campus is open, accepting, and consistently working toward inclusivity. Momo wanted the campus to “become actively conscious of this privilege and to come together to use our privilege to give back to the LGBTQ+ community.”

It does not stop there. Pride Week isn’t just about celebrating queerness; it is about celebrating differences. Momo hopes that the tradition continues after Momo graduates, but for now has not planned that far ahead. Still, if Pride Week continues to be this successful, it will likely become a natural part of Simon’s Rock.

Momo is currently studying neuroscience and psychology, and says, “I am absolutely obsessed with the brain, as I think everyone that knows me knows.” A native of Yemen who immigrated to the States at age six, Momo plans to use that knowledge and fluency in Arabic to help traumatized children from Middle Eastern war zones. They will be lucky to have Momo.