Until Now Gives Way To Then: A Student’s Perspective on the College Archives 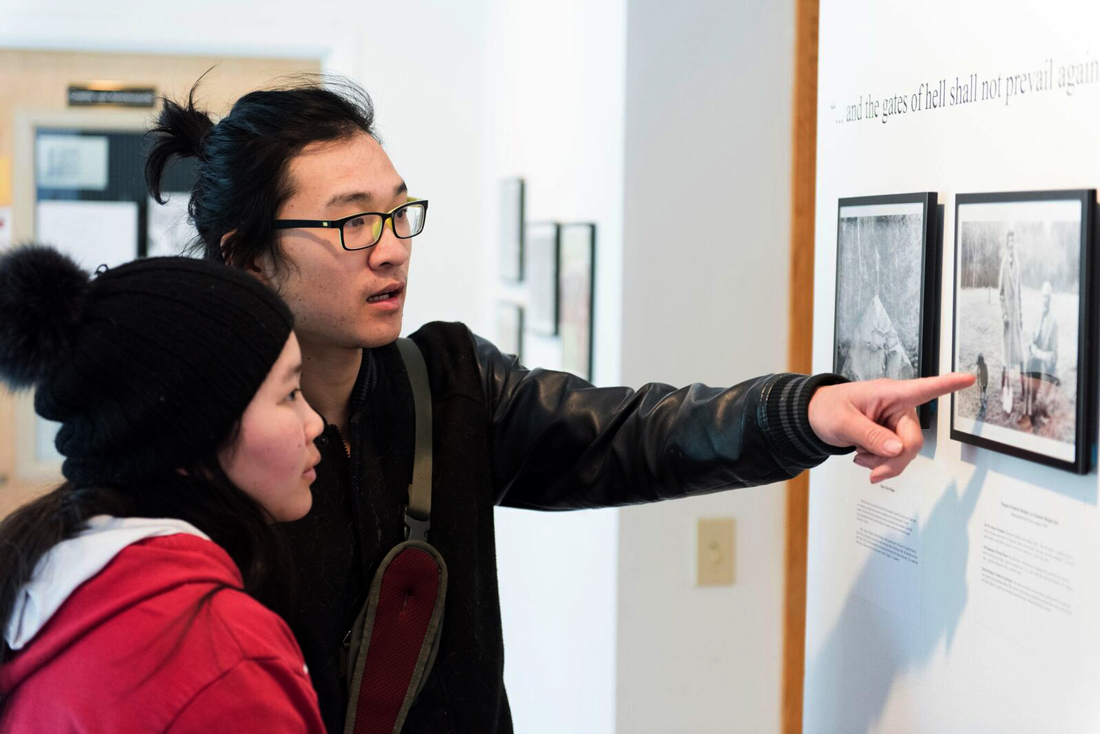 Feeling adrift during the first semester of my junior year, I was lucky enough to stumble upon a work-study job in Simon’s Rock Archives. With College Archivist Margaret Cherin’s guidance, I found a purpose and a passion that defined the rest of my time at Simon’s Rock, and it has been the absolute most rewarding part of my undergraduate career.

“I can’t abide romantic notions of some vague long ago.
I want to know what’s true.
Dig deep into who and what and why and when.
Until now gives way to then.”

-from Fun Home, a musical based on a book by Alison Bechdel, class of 1977 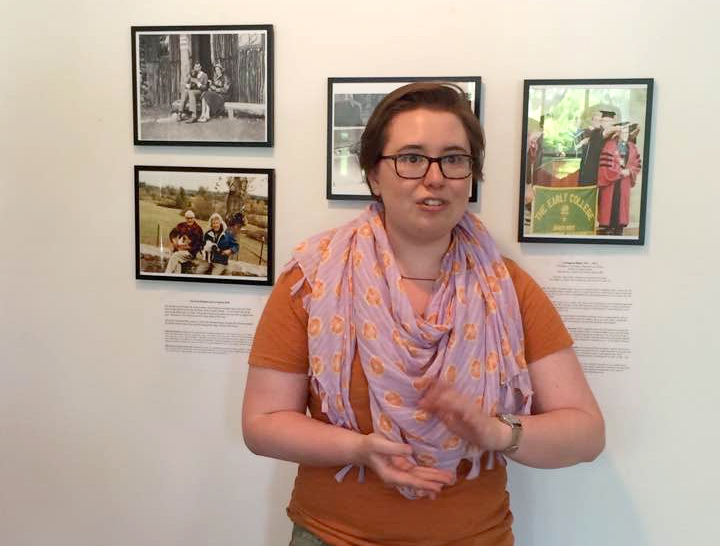 Molly McGowan in front of the exhibition she created from archival photographs for reunion weekend in 2016. “And the Gates of Hell shall not prevail against it… 50 years of Simon's Rock” is currently on view at the Leibowitz Center for International Studies.

Beginning in September 2015, I conducted interviews with long-term faculty and staff for the Institutional Oral History Project, which first began in 2005. Upon my first visit to the archives, I knew that was a project I wanted to revive. I have thoroughly enjoyed getting to hear the story of Simon’s Rock as told by the people who knew and loved it the best. Interviews were often serious but more often they were a lot of fun. Some of my favorite anecdotes include: Ba Win talking about a student prank pulled on an important guest, Peter Filkins talking about persuading a donor to pay for all Seminar 2 students to see Don Giovanni at the Met Opera, and Maryann Tebben talking about Gabriel Asfar making food sculptures at their weekly French Table in the Dining Hall.

As I pored over endless photographs and documents, I began to feel more closely connected to the school than ever before. Everywhere I go on campus, I am reminded of a story. Elizabeth Blodgett Hall wasn’t simply the painting in the library that I had never bothered to look at, but a fierce, determined visionary who gave campus tours in her golf cart. Jane Rodgers wasn’t simply a plaque in a lobby, but a beloved community member who was known for her beautiful hair and legendary Christmas parties. Hillman and Jackson weren’t simply names on the door of the art gallery, but Arthur and Bill: brilliant artists who inspired generations of Rockers, including Arthur’s advisee and one of my favorite authors, Alison Bechdel.

I was especially grateful for having been able to interview Nancy Yanoshak in light of her death in February 2017. Although I never took a class with her, I got to know her through a delightful interview, which included Soviet jokes, a snippet of a Ukrainian Christmas carol, impersonations of Leon Botstein and Betty Hall, her pride about Ian Bickford’s appointment as provost, her best wishes to the future of Bard Academy, and her thoughtful answer to the question, “how would you like to be remembered?” Her death was a great loss to our community, but I take heart knowing that future generations of Rockers can learn about her the way I learned about the likes of Natalie Harper, Eileen Handelman, and Doreen Young: through the photographs, newspapers, slides, cassette tapes, and even super 8 film in our archives.

On the occasion of our 50th anniversary, looking back is just as important, just as fruitful, and just as fun as looking forward. I was on campus for reunion last summer and have been looking forward to this year’s reunion ever since. I spent hundreds of hours curating an exhibition of archival photographs and quotes from the oral history interviews, and I was really nervous for anyone else to see it. What if the alumni told me that I got it all wrong?

In true Simon’s Rock fashion, there has been plenty of constructive criticism—including a typo corrected by Bernie Rodgers himself—but I have been humbled and amazed by the overwhelmingly positive responses. One alum almost ran me over as he yelled, “Yo, that’s my MAN!” upon seeing a photograph of René Biber from across the room. Another remembered Livy Hall’s favorite red plaid jacket and was delighted to see that the exhibit included not one but two photographs of him wearing it. Younger alums were intrigued by photos of their professors from the 1970s and 1980s, and older alums were astounded by how much the campus had grown since their time. Meeting alums who have gone on to do incredible things and also owed Simon’s Rock a great debt of gratitude gave me a lot of hope for my future, and the future of the institution. I am proud to now officially be a Simon’s Rock alum because, as I delved deeper into the school’s history, I became surer that this was the perfect place for me.